My Car Radio Turns On and Off by Itself (SOLVED)

The strange phenomenon of a car radio going on and off by itself is caused by a system problem and must be addressed.

Basically, there are 3 major causes for this abnormality:

Improper installation: To begin with, improper installation is a very common problem that causes the car radio to malfunction. This is also known as user error, and it occurs when the car radio is set up incorrectly by the user.
Wiring: When a power or ground connection is loose or connects and disconnects randomly. When driving on bumpy roads or even just driving on regular roads, this problem will be more obvious as the connection will constantly break or short.
Duration/Electrical Issue: Finally, the passage of time is a factor causing car radio malfunction as the radio heats up and shuts off to protect itself. This may be due to an electrical issues.

Why Does My Car Radio Turn on by Itself?

A short in the wiring is usually the cause of your car radio coming on by itself. Most of the time, a simple DIY effort will fix it. But there are times when the issue is more serious. If this happens, check the wiring first to see whether it’s the source of the problem.

To avoid the situation from recurring, double-check that the cables are firmly connected. If you are unable to do so, you can make use of the car manual or contact a repair shop for assistance.

When attempting to repair your car radio, look for any loose wires that could be exacerbating the problem. You can use scissors to cut them off, but be careful not to leave any copper behind.

Heat shrink tubing can also be used to wrap the wires so they don’t come into touch with one other, causing your radio to switch on by itself. If you can’t fix the problem, your car’s radio system will need to be replaced.

Another issue could be that your radio is not correctly linked to the battery in your vehicle. If you’ve recently purchased a new one, this can be a huge problem.

To fix this, remove the radio from the dashboard and connect it to the radio’s power supply to fix it. Cut any wires that aren’t linked to the power supply and disconnect them from the stereo.

Examine the copper traces on the wires after that. If any copper pieces are discovered, they should be cut off and replaced with new ones. If you can’t do that, you can cover the wires with heat shrink tubing, which will help avoid any shorts.

Why Does My Car Radio Turn off by Itself?

A likely reason is the power feed to your car’s radio. In this situation, the power is being supplied to other components rather than the device itself. 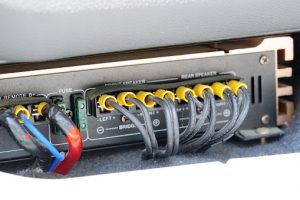 It’s possible that the radio will be tuned to an unrecognizable channel and so will not receive any power. When this occurs, you need to replace the ignition cylinder to solve this problem. Or try changing the battery in the radio. If that doesn’t work, the entire system has to be replaced.

If your car radio continues going off while the engine is running, the battery is most likely dead. If the problem arises when you’re parked, it is most likely due to a lack of power to the radio. The most advisable solution is to replace the battery.

Your car’s electrical harness should be examined often. The cables in your car’s radio can be placed incorrectly at times.

Fix the problem as soon as you notice it. A power supply connected to the car radio may be defective and will not turn off when the ignition is turned off. Also, look for any loose wires or connections that are not properly fixed and fix them.

Why Does My Car Radio Turn Off When AC Is On?

A broken connection or defective wiring can cause a variety of problems in your car, including overworking other components.

This could, for example, cause the radio to turn off anytime the car’s air conditioner is turned on. Whenever this occurs, some part to be checked includes the following,

Alternator: The alternator’s power supply is one of the factors that causes the radio to turn off anytime the air conditioner is turned on; the alternator must deliver adequate power to all of the car’s components, or else power will be cut off from one to the other.
Battery: One thing to verify is whether the car’s battery is still functional; this issue could be caused by a weak or failing battery cell.
Ignition System: if the ignition system is bad, it may cause the car part to fail at the start of the other.

Why Does My Car Stereo Cut Off at High Volume?

If your speaker short-outs when listening to music or listening to the radio at high level, it’s likely that your stereo wiring has to be adjusted, or that your car audio components need to be repaired or replaced.

Sound cuts are most commonly caused by an overheated amplifier or a loose speaker cable. Amplifiers produce a lot of heat, especially when music is played at high volumes for an extended length of time. The amplifier requires sufficient airflow to handle this quantity of heat.

Some amps may even have electrical issues that cause overheating. In some cases, this can cause your amp to blow its fuse, but not always.

Follow this procedure if your car speakers cease working. Make sure there is sufficient airflow where the amplifier is installed. The airflow keeps the amp cool at all times, preventing sound cuts. It’s also a good idea to double-check the connections of your speaker cords.

It’s really unpleasant to hear strange noises coming from your car’s audio system. Almost every driver has heard car stereo noise at some point.
Unwanted noises can come from a variety of places, but here are a few of the most typical.

There are several reasons why your car radio may suddenly go off or come on, you should be able to find the issue with this post as a guide. Most of the time, you only need a quick fix and not the help of a professional.